Question 1.
State the location and function of different types of meristems.
Answer:
A meristematic tissue represents a group of cells that have retained the power of division throughout the life of an individual. The meristematic tissues are of three types, i.e., apical, intercalary and lateral meristem.

Question 2.
Cork cambium forms tissues that form the cork. Do you agree with this statement? Explain.
Answer:
Yes, cork cambium forms tissues that form cork. As the stem continues to increase in girth another meristematic tissue called cork cambium or phellogen develops in cortex region of stem. The phellogen cuts off cells on both sides. The outer cells differentiate into cork or phellem. The inner cells differentiate into secondary cortex or phelloderm. Cork is impervious to water due to suberin and provides protection to underlying tissues.

with age in the form of annual rings. In each annual ring, there is wide or broader spring or early wood or spring wood and narrow autumn or late wood.

In old stems, the central part of wood becomes non-functional and dark coloured due to tyloses and deposit of resins, gums, tannins. It is called r duramen or heartwood. The outer, functional wood is called sapwood.

(ii) Cork Cambium: As the stem continues to increase in girth due to the activity of vascular cambium the outer cortical and epidermal layers get broken and need to be replaced to provide new protective cell layers. In this way, cork cambium or phellogen develops in the cortex region. Phellogen cuts of cells on both sides.

The outer cells differentiate into cork or phellem while, the inner cells ; differentiate into secondary cortex or phelloderm. Due to the activity of cork cambium, pressure builds up on remaining layers peripheral to
phellogen and ultimately these layers die and slough off. At places, aerating pores called lenticels develop, which have loosely arranged , complementary cells. Question 4.
Draw illustrations to bring out the anatomical difference between:
(a) Monocot root and Dicot root
(b) Monocot stem and Dicot stem
Answer: 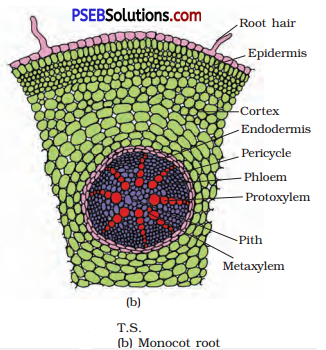 (a) Anatomical Differences between Monocot Root and Dicot Root
(i) Anatomy of Monocot Root
(a) The structure of epidermis, cortex, endodermis and pericycle of a monocot root resembles exactly those of a dicot root.
(b) Vascular bundles are radial, and polyarch.
(c) Pith is large and well-developed; it is composed of parenchyma cells T.S of Dicot root
(a) Epidermis is single layered and many cells bear root hairs; cuticle is absent.
(b) Cortex is made of several layers of parenchyma cells.
(c) Endodermis consists of a single-layer of cells. The cells have a deposition of suberin, in the form of casparian strips, on their radial and tangential walls.
(d) Pericycle comprises a few layers of specialised parenchyma cells inner to the endodermis.
(e) Vascular bundles are radial and may range between two and six, though commonly there are four groups; i.e., tetrarch; xylem is exarch.
(f) Pith is very small and made of parenchyma cells.

(b) Anatomical Differences between Monocot Stem and Dicot stem
(i) Anatomy of monocot stem
(a) Epidermis is single layered and trichomes are absent; cuticle is present on its outer surface.
(b) Hypodermis consists of two or three layers of sclerenchyma cells.
(c) Ground tissue is parenchymatous and is not differentiated into cortex or pith.
(d) Vascular bundles are many and scattered in the ground tissue; they vary in size.

(ii) Anatomy of dicot stem
(a) Epidermis is the outermost layer of cells; externally it is covered with a cuticle and may bear trichomes and a few stomata.
(b) Hypodermis consists of a few layers of collenchyma cells, just below the epidermis.
(c) Cortex consists of parenchyma cells.
(d) Endodermis is single layered and the cells are rich in starch grains and hence it is also referred to as starch sheath.
(e) Pericyde occurs inner to the endodermis, above the phloem of vascular bundles in the form of semi-lunar patches (hence also referred to as bundle caps); it is composed of sclerenchyma.
T.S. of Dicot Stem (f) Vascular bundles are characteristically arranged in the form of a ring.

Question 6.
The transverse section of a plant material shows the following anatomical features:
(a) The vascular bundles are conjoint, scattered and surrounded by a sclerenchymatous bundle sheaths.
(b) Phloem parenchyma is absent. What will you identify it as?
Answer:
It is a transverse section of monocotyledonous stem.

Question 7.
Why are xylem and phloem called complex tissues?
Answer:
Xylem and phloem are made up of more than one type of cells that is why they are called as complex tissues :
(i) Xylem is composed of four different kinds of elements, namely-tracheids, vessels, xylem fibres and xylem parenchyma. Tracheids are dead tube-like cells which are thick walled, vessels are made up of large number of tube cells placed end to end. Xylem fibres are thick walled cells that maybe septate and aseptate. Xylem parenchyma is living and thin walled cells.

Question 8.
What is stomatal apparatus? Explain the structure of stomata with a labelled diagram.
Answer:
The minute pores present in the epidermis are known as stomata. The stomata may be surrounded by either bean-shaped (in dicots) or by dumb-bell-shaped (in monocots) guard cells. The guard cells in turn are surrounded by other epidermal cells, which are known as subsidiary or

Question 11.
What is periderm? How does periderm formation take place in
the dicot stems?
Answer:
Phellogen, phellem and phelloderm are collectively called as periderm. Phellogen develops usually in the cortex region. Phellogen is a couple of layers thick. Phellogen cuts off cells on both sides. The outer cells 1 differentiate into cork or phellem, while the inner cells differentiate into secondary cortex or phelloderm. All these together form periderm.

Question 12.
Describe the internal structure of a dorsiventral leaf with the help of labelled diagrams.
Answer:
The vertical section of a dorsiventral leaf through the lamina shows three ; main parts namely, epidermis, mesophyll and vascular system. The epidermis which covers both the upper surface (adaxial epidermis) and lower surface (abaxial epidermis) of the leaf has a conspicuous cuticle. The abaxial epidermis generally bears more stomata than the adaxial epidermis. The latter may even lack stomata. The tissue between the upper and the lower epidermis is called the mesophyll. Mesophyll, which possesses chloroplasts and carry out photosynthesis, is made up of parenchyma. It has two types of cells – the palisade parenchyma and the spongy parenchyma.

The adaxially placed palisade parenchyma is made up of elongated cells, which are arranged vertically and parallel to each other. The oval or round and loosely arranged spongy parenchyma is situated below the palisade cells and extends to the lower epidermis. There are numerous large spaces and air cavities between these cells. Vascular system includes vascular bundles, which can be seen in the veins and the midrib. The size of the vascular bundles are dependent on the size of the veins. The veins vary in thickness in the reticulate venation of the dicot leaves. The vascular bundles are surrounded by a layer of thick walled bundle sheath cells.
T.S. of Dorsiventral Leaf