Question 1.
Which of the following groups contains only biodegradable items :
(A) Grass, flowers and leather
(B) Grass, wood and plastic
(C) Fruit-peels, cake and lime-juice
(D) Cake, wood and grass.
Answer:
(A), (C) and (D) groups.

Question 3.
Which of the following are environment-friendly practices?
(A) Carrying cloth-bags to put purchases in while shopping
(B) Switching off unnecessary lights and fans
(C) Walking to school instead of getting your mother to drop you on her scooter
(D) All of the above.
Answer:
(D) All of the above.

Question 4.
What will happen if we kill all the organisms in one trophic level?
Answer:

This can be illustrated by the following example :
A large number of toxic chemicals like pesticides, weedicides, insecticides and fungi-cides are used to protect the crop plants from pests and diseases. Some of these chemi-cals get mixed up with the soil whereas others get washed down into the surface water bodies like ponds, rivers, etc., and the underground water bodies.

Water in a pond, lake or river contain only a small amount (0.02 ppm) of the harmful chemicals. The algae (phytoplankton) and protozoa (zooplankton) which utilize this wa-ter, contain a higher proportion (5 ppm). The fish which feeds on these organisms has a still higher amount of chemicals (240 ppm.) Birds which feed on these fish contain the highest amount (1600 ppm).

Therefore, we observe that as we go higher and higher in the food chain, the concentration of pesticides in the body of the organisms gradually increases. For example, in the above cited example, the biological magnification of harmful pesticides goes up to 8000 times from water to fish eating birds.

Effects of biological magnification. This is the reason why our food grains such as wheat and rice, vegetable and fruits and even meat contain varying amounts of pesticides residues. So, the highest trophic level at the extreme right of food chain has the maximum concentration of harmful chemicals in a food-chain.

Question 9.
Why damage to the ozone layer is a cause of concern? What steps are being taken to limit this damage?
Answer:
Ozone layer absorbs ultraviolet radiation of the sunlight which is very harmful to human beings. If the ozone layer in the atmosphere is depleted, these radiations would reach the earth and would cause many damages such as skin cancer, genetic disorders in human and other living beings.

The steps taken to limit the damage of ozone layer are as follows :

There are other substances such as metals, plastics etc. which cannot be broken down into simpler substances by the action of living organisms or biological processes are termed non-biodegradable substances.

Question 2.
Give any two ways in which biodegradable substances would affect the environment.
Answer:

Question 3.
Give any two ways in which non-biodegradable substances would affect the environment.
Answer:

Food chain: It is a sequential list of one organism consuming the other. 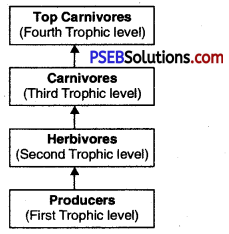 Question 5.
What is the role of decomposers in the ecosystem?
Answer:
These oganisms feed on the dead bodies of plants and animals. Bacteria, fungi and some lower invertebrates are examples of decomposer. They breakdown the organic components into simple inorganic molecules. They carry out natural process of decomposition. They return the simple components to soil and help in making the steady state of ecosystem. Decomposers are essential component of an ecosystem. They create a balance in the environment. They are called natural changing agents.

Question 6.
What is ozone and how does it affect any ecosystem?
Answer:
Ozone. Ozone is a molecule formed by three atoms of oxygen in the presence of

Question 7.
How can you help in reducing the problem of waste disposal? Give any two methods.
Answer: