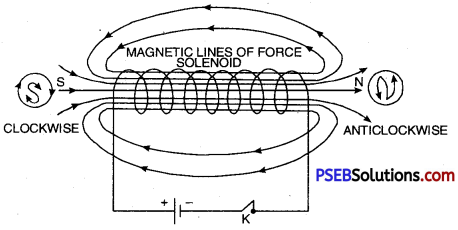 Magnetic field due to current carrying solenoid is similar to bar magner.

Since the current flows in the various turns of the solenoid in the same direction, the magnetic field produced by each turn of the solenoid adds up, giving a very strong resultant field inside the solenoid.
Hence, a solenoid may be used in making electromagnets.

The strength of the magnetic field produced depends upon the following three factors : 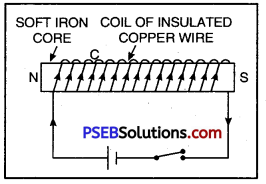 A simple electromagnet is as shown in Figure. To make an electromagnet, a soft iron core is placed inside a solenoid having large turns of insulated copper wire. The two ends of the solenoid are connected to a battery and a key. Strength of electromagnet depends upon

Construction: A D.C generator has the following main parts :

Working. When the coil rotated about its axis, then emf is induced in arms AB and CD of the coil. The direction of induced electromagnetic force can be determined by Fleming’s right hand rule.

Suppose in the beginning the coil is in vertical position with its arm AB in the lower position and CD in the upper position. When the coil is rotated about its axis then during the first half rotations the arm AB moves in the upward direction and CD in the downward direction. According to Fleming’s right hand rule the direction of induced current in arm AB will be from A to B and in CD it is from C to D. Question 4.
Arrange an activity to show that current is produced due to change in magnetic field.
Answer:
Make a coil XY having large number of terms of insulated copper wire wound area as shown in the figure. Connect the ends of the coil to a sensitive galvanometer.

Question 6.
What are magnetic field lines? How can the magnetic lines of force due to a bar magnetic be shown?
Answer:
Magnetic Field. The area of field around the magnet in which the force of attraction or repulsion due to magnet is experienced, is called Magnetic field.

Magnetic field lines: It is the path in the magnetic field, along which the unit N-pole would move when it is free to move.
magnet can be shown by the following two methods :
1. Place a magnet on a cardboard sheet. Now spread iron filings on the Cardboard and tap it gently will when the iron filings will arranged itself in the pattern of magnetic lines of force. Question 1.
How will you prove that current flowing through a copper wire produces magnetic effect?
Answer:

Oersted Experiment. Oersted took a conducting wire XY and placed a magnetic needle under this wire, then pressed the key and passed current through the wire in the direction from X to Y as shown in figure (a). He observed that the N-pole of the magnetic needle gets displaced towards west. Similarly, he repeated the experiment by reversing the direction of flow of current in the wire by changing the terminals of battery connected to the ends of the wire. This time the direction of deflection of the needle was opposite i.e. from Y to X as shown in figure (b).

The direction of deflection of magnetic needle can be remembered by ‘SNOW’ rule. This rule states that “If current in the wire XY flows from south pole to north pole when the current carrying conductor is placed above the conductor then the N-pole of the conductor gets displaced towards the west direction.”

Question 3.
Define magnetic field and write important properties of magnetic lines of force.
Answer:
Magnetic Field. It is the field or region around a magnetic in which the effect of magnet (force of attraction or repulsion) can be experienced.
Magnetic Lines of Force. The path on which a unit N-pole moves when it is free to move, is called magnetic line of force.

Question 5.
In the given figure what are the lines shown around the magnet called? Also give any two properties of these lines. Answer:
In the figure the lines shown around the magnet are called magnetic field lines.

The rule is used to determine the direction of magnetic field lines produced around a straight conductor carrying current.

Question 7.
Which rule is shown in the figure? Define the rule. In which device this rule is used?

Answer:
Fleming’s Left Hand Rule is shown in the figure.

This rule is used in the working of an electric motor. This rule is used in the working of an electric motor.

Question 9.
Name the law shown in the figure. Label 1 and 2 law. Question 10.
In the alongside figure a straight conductor B is carrying current in the vertical downward direction.
(a) What will be the direction of magnetic field lines around the conductor?
(b) Name the law which you have used for your answer. Question 12.
List some such electric appliances in which electric motor is used.
Answer:
With the help of electric motor all such appliance work in which it is required to produce rotatory in motion e.g. Electric fan, tape recorder, mixer etc.

Question 13.
What is Electric Fuse? What is its importance?
Answer:
Electric Fuse. It is a device used in electric circuits which prevents the other electric appliances connected in the circuit from being damaged by high current. It has low meeting point.

Importance (use) of Electric Fuse. If for some reason heavy current begins to flow in the circuit then fuse wire melts and breaks the circuit and accident is prevented.

Question 15.
What is meant by over-loading?
Answer:
Over-loading. Overloading means to draw large current from the mains. This happens when many appliances are connected with single socket simultaneously. The supply wires as well the wires used in household wiring has a specific rating. The rating of 15 A means that if a current upto 15A is passed through the circuit, there is no likely damage feared to the circuit. But if a current more than maximum allowed limit is passed, there may be excessive heating of the wires and it may damage the wiring.

Question 16.
When does an electric short-circuit occur?
Answer:
Short-circuiting. An electric circuit is said to be short-circuited if a live wire touches neutral wire or earth wire, a large current flows through the circuit due to almost zero resistance of the circuit. This results in increase of temperature and hence heating of wires which may cause fire or damaging the appliance.

To save the circuit from damage due to over-loading or short-circuiting, a fuse of proper rating is put in each circuit.

Question 1.
What is a dynamo?
Answer:
Dynamo. It is a device which converts mechanical energy into electric energy.

Question 2.
On what principle is an a.c. motor based?
Answer:
It is based upon Fleming’s left hand rule.

Question 3.
What is an electric motor?
Answer:
Electric motor. It is a device which converts electric energy into mechanical energy.

Question 6.
In which part of a bar magnet, the magnetic field lines are more denser?
Answer:
At the poles of a magnet.

Question 8.
Name any two devices which uses electric motor as an essential component in their working.
Answer:

Question 9.
Define an electromagnet.
Answer:
Electromagnet. The combination of an soft iron core and current carrying insulated wire wound over it, is called an elctromagnet.

Question 10.
Define magnetic pole.
Answer:
Magnetic poles are points near the ends of a magnet where magnetic field is maximum,

Question 11.
Give a property of a Magnet.
Answer:
Directive Property (stays always in N-S directions, when suspended freely).

Question 13.
What is electric fuse?
Answer:
Fuse is a safety device which saves electric circuit from damage due to over loading a short circuit.

Question 14.
Which electrical phenomenon is responsible for deflection of galvanometer needle in the given figure? Question 3.
What is the colour of neutral wire in a domestic electric circuit?
(A) Black
(B) Red
(C) Green
(D) No specific colour.
Answer:
(A) Black

Question 4.
When a current carrying wire and neutral wire come in contact so that heavy current begins to flow, this arrangement is called:
(A) Overloading
(B) Short circuit
(C) Earthing
(D) All the above.
Answer:
(B) Short circuit

Question 6.
Which of the following is source of direct current?
(A) Dry cell
(B) Button cell
(C) Lead battery
(D) All these.
Answer:
(D) All these.

Question 7.
The device used for producing electric current is called a :
(A) Generator
(B) Galvanorneter
(C) Ammeter
(D) Motor.
Answer:
(A) Generator

Question 8.
Similar magnetic poles
(A) Attract
(B) Repel
(C) Both attract and repel
(D) None of these.
Answer:
(B) Repel.