Think and Answer (Textbook Page No. 202)

Question 2.
Should we check the wastage of water and why ?
Answer:
We must control water wastage. Reduce water wastage by purifying water and reusing it at homes, factories, farms and social organizations. Doing so reduces pollution and also saves water.

Think and Answer (Textbook Page No. 203)

Question 1.
…………………. is the process by which water is converted from its liquid state to a gaseous state.
Answer:
Evaporation.

Question 2.
………………….. is the process by which water is converted from its gaseous state to a liquid state.
Answer:
Condensation.

(ii) The process of seeping of water into the soil is called …………………. .
Answer:
Infiltration

(v) A farmer can use water economically in the field, by …………….. .
Answer:
Drip irrigation system

(i) Water cycle helps in maintaining water on the earth.
Answer:
True

(ii) About 97% of total water present on the earth is freshwater.
Answer:
False

Question (i)
What do you mean by groundwater ?
Answer:
This water is present on the upper layer of Earth in gaps between the soil particles, inside the broken rocks is accumulated. This water automatically rises to the surface in the form of a waterfalls. This water can be brought to the surface of the earth through tube wells.

Question (ii)
Why is sea and ocean water not fit for drinking ?
Answer:
The water of the Sea and oceans is not drinkable because of excess salt present in it. One litre of seawater contains 35 grams of salt. By drinking this water dehydration, kidney failure, fainting and even death can occur.

Question (iii)
Define aquifers.
Answer:
Wet Rock Layers. In many places there are layers of hard rock beneath the water table in which water get collected. These layers of rock are called wet rock layers.

Question (i)
Enlist some activities by which water is being wasted by people.
Answer:
The following are some of the human activities that waste a lot of water:

2. Irrigation of the garden should be done with drip irrigation system or sprinkler from which only that amount of water will be supplied as much is required i.e. water will not be wasted.

Question (iii)
How is water important to us ?
Answer:
Importance of Water.
Water is one of the most important resources on earth. All living things need water to survive. In addition to drinking, human beings need water for cooking, bathing, washing clothes, washing utensils, cleaning teeth, cleaning house. Water is also required to generate electricity, for agricultural purpose to manufacture and various utilities.

Question (iv)
How increase in human population is leading to depletion of water table ?
Answer:
Human Population Growth is Responsible for depletion of water table.
As human population is growing rapidly, so does the demand for water for its daily needs. Groundwater is often used for the construction of homes, shops, offices, roads, railways and many other purposes. Such construction also reduces the area under which rainwater seeps underground. In this way we are not only consuming groundwater but also reducing groundwater seepage.

Question (v)
Why do plants wilt and finally dry up if they do not get water for some days ?
Answer:
If we don’t water plants it result in dehydration of leaf cells and stems, from which the as a result of which plant, wither without standing upright and die after some time.

(iv) The process of water seepage into the ground is called ……………….. .
Answer:
Infiltration

Question (ii)
Which one of the following is not responsible for water shortage ?
(a) Rapid growth of industries
(b) Increasing population
(c) Heavy rainfall
(d) Mismanagement of water resources.
Answer:
(c) Heavy rainfall

(i) The fresh water stored in the ground is much more than that is present in the rivers and lakes in the world.
Answer:
True

(ii) Water shortage is a problem faced only by the people living in rural areas.
Answer:
False

(iii) Water from rivers is the only source for irrigation in the fields.
Answer:
False

Question 1.
In which structure, the vast quantity of water is available ?
Answer:
Seas or Oceans.

Question 4.
What is significance of ‘water day’ ?
Answer:
To cause awareness among the people about the importance of conserving water.

Question 5.
Is water abundant every where ?
Answer:
No, the distribution of water all over the world is not even.

Question 6.
What are water vapours ?
Answer:
Water in gaseous form.

Question 7.
How is water supplied in cities ?
Answer:
By a network of pipes.

Question 8.
What is water table ?
Answer:
Water Table. The upper limit of layer of water filled in gaps and crevices of rocks is called water table.

Question 9.
How is deforestation responsible for depletion of water table ?
Answer:
By deforestation, the effective area for seepage of water decreases.

Question 11.
What are deserts ?
Answer:
Deserts. Deserts are areas which get scanty rainfall.

Question 12.
What are the causes of floods ?
Answer:
Excessive rainfalls.

Question 13.
What happens when it doesn’t rain ?
Answer:
Drought occurs due to lack of rainfall.

Question 14.
Who is responsible for preventing loss of precious water in cities ?
Answer:
Sivil Authority.

Question 1.
How does water occur in nature ?
Answer:
Water is one of the most widely distributed and abundant substances occuring in nature. It occurs in nature as follows:

Question 1.
Explain the water cycle process with the help of diagram.
Answer: 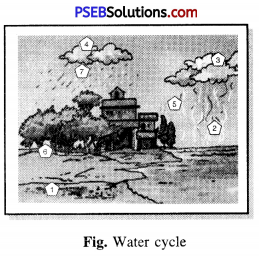 Water Cycle:
There is a constant supply of water on Earth through various natural methods. All these methods together form the water cycle. During the water cycle, water gets to the earth in one of its three forms:
(i) solid (ii) liquid and (iii) gas. Water from earth’s available groundwater sources – oceans, lakes, rivers, lakes, etc. – evaporates through the sun’s heat and remains in the atmosphere. These water vapours condense to form cloud water and fall on the earth in the form of rain. In the solid state, water is in the form of ice and snow on the poles of the earth and in the form of glaciers in the mountains. Together they form the entire water cycle.

1. Population growth.
As the population grows, the demand for construction of buildings, shops, offices, roads and many other institutions increases. This leads to a reduction in open areas such as farmland and playgrounds. Due to this the rate of absorption of rain water in the soil decreases. Due to this the ground water level is constantly drying up.

2. Growing Industries.
Water is being used by all industries. Water is needed in the production of everything. Water used by most industries is extracted from the land.

4. Poor management of water.
When water is supplied through pipes, leakage occurs in the supply pipes which causes a lot of water loss and therefore causes ground water level to fall.